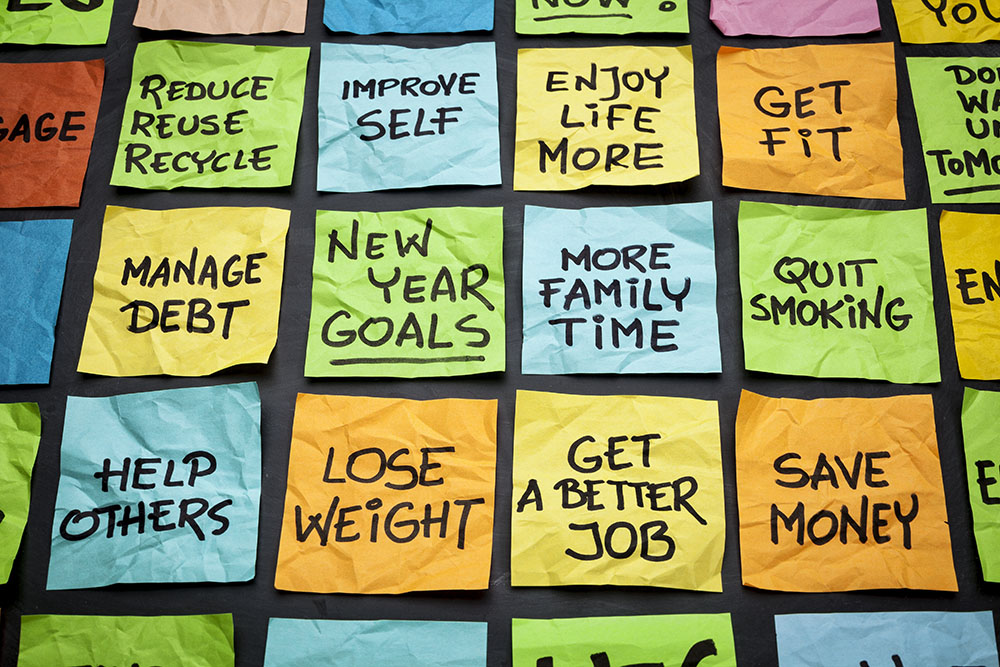 Lose weight. Save more cash. Start hitting the gym. Every year, half the population make New Year’s resolutions like these. Only 8 percent keep them. Even if you nail all of your goals the first week, the successes usually dwindle as January wears on. Clearly, we’re doing it wrong.

The biggest problem is the tendency to shoot for the moon, making lofty, all-or-nothing resolutions without a concrete plan for achieving them. “Typically, they are anemic intentions — weak, vague, general goals that have no power to move us to action,” says Dr. Tim Pychyl, a psychology professor at Carleton University in Canada and author of Solving the Procrastination Puzzle.

The secret to actual, lasting improvement is making small, daily tweaks that build lifelong healthy habits. “Then, when you do those actions, you’ll be making progress on your overall goals,” says Pychyl. “There’s nothing like progress to fuel motivation, self-efficacy, and well-being.”

Sure, it’s faster to order in Thai food or nuke a frozen meal than prep supper from scratch. But what you’re gaining in time, you’re losing in taste, nutrition, and good health. Studies show people who cook most of their meals at home are leaner, have less diabetes, and consume fewer calories, less sugar, and less fat overall — including on the nights they do dine out. Commit to cooking four dinners per week using fresh ingredients. It might seem daunting at first, but there are thousands of healthy, easy recipes online and creative ways to turn one night’s leftovers into the next night’s feast.

Ban Your Phone When You’re Not Alone

There’s no need for a full, week-long technology fast. Instead, limit yourself a little every day. While you’re on a date, at happy hour with co-workers, having Tuesday night dinner, or really any time you’re hanging out with another person, put your phone away. It’s a small piece of sanity that will keep technologies from negatively impacting your mental health. And yes, when your date gets up to use the restroom, keep the phone away — chat up the bartender or check out the wine list instead.

Assuming you eat right and take care of your body, you can do without the thousands of supplements out there. Except for one: vitamin D. Most men don’t spend enough time out in the sun year-round to produce enough D, and it just isn’t found in very many foods. But vitamin D is crucial for your bones, brain, metabolism, and helping you stave off diseases down the road. Take at least 2,000 IU of vitamin D3 a day — some doctors suggest more like 5,000 IU. You might not feel the difference now, but your old-man self will thank you.

Take the Stairs, Every Time

Climbing stairs instead of riding the elevator is one of the simplest ways to burn bonus calories. But if you make some vague resolution like “I’ll start taking the stairs more often,” you probably won’t. Get specific. Pick a minimum number of floors — 10 is reasonable — that you have to be ascending before you’ll allow yourself to take an elevator. Climbing 10 flights may be a challenge sometimes, but that’s the whole point.

Commit to a Solo Getaway

If you’ve never had the chance — or the gumption — to travel alone, make time for at least one solo trip this year. You can do whatever you want when you want, clear your head, meet random new people, and maybe learn a thing or two about yourself. It doesn’t have to be 10 days hiking in Peru. Even an overnighter to somewhere semi-close can do wonders for body and soul. Drive to a trout stream upstate and stay in a cheap motel nearby. Airbnb a beach house with a killer sunset view, hammock, and blender for margaritas. Or just grab your tent and sleeping bag, get in your car, and see where the road takes you.

To help you get cooking with fresh ingredients, set up a small in-home herb garden. You can buy a ready-to-go system such as AeroGarden, which will thrive indoors — on a kitchen countertop or even atop the file cabinet. But if you have the space, try potting your own herbs like basil, oregano, rosemary, cilantro, and dill. Basil, specifically, grows like a weed, so clip it regularly, make pesto, keep some in the fridge, and freeze any extra for later.

Are your Facebook friends really wishing you a Happy Birthday, or simply responding to an alert — part of the grand Pavlovian experiment that is social media? In most cases, it’s impossible to tell. But when someone sends a letter — taking the time to write complete thoughts with a pen, seal the envelope, and buy a stamp — the sentiment counts. Try committing to writing one letter a week to an old friend, elderly relative, former colleague, or anyone you wish you saw more often. And when vacationing in the Caribbean or rafting in the Rockies, make a pit stop to buy, scribe, and mail a few postcards.

Shake up Your Lunch Menu

If your go-to lunch is a salad topped with fresh veggies and grilled chicken, congrats, you’ve made a healthy choice. But you can do better. Eating the exact same foods every day, no matter how nutritious, doesn’t provide enough variety to allow your gut microbiome to thrive. These bacteria eat what you eat, so consuming a wide range of foods is the best way to ensure a healthy, diverse collection of microbes, which is crucial to preventing disease-causing systemic inflammation. One study found that people who eat more than 25 different plants per week have healthier microbiomes than those who consume fewer than 10. Since you’re probably already shaking up your dinner routine, focus on lunch. Pack or order something different each weekday, and try a totally different menu the next week.

Make Your Bike Your Most Used Vehicle

Biking  — to work, for groceries, to see the game at a friend’s house, to take your kid to soccer — is the easiest, and by far most fun, healthy habit you can start. Make a pact with yourself to ride once a week. Go somewhere, anywhere, that you otherwise wouldn’t. It will only grow from there.

Quit Soda (Yes, Even as a Mixer)

Sugar-sweetened soft drinks are just about the worst things you can consume. They’re nothing but liquid sugar, enamel-eroding and bone-depleting acid, and a slew of chemicals. But you knew this already. So why the hell are you still drinking soda? Make 2016 the year you finally shake your daily Pepsi habit and trade Jack-and-Cokes for whiskey on the rocks, as it should be. Don’t switch to diet sodas, either. They harm bones and teeth too, and research suggests your body mistakes the artificial sweeteners for sugar, potentially increasing diabetes risk just the same as full-strength sodas.

Work on Your Career, Not Your Job, for One Hour a Week

Your dad may have put in 30 solid years at one company, but the likelihood of being a lifer in today’s world — let alone staying in a single career till you retire — are slim. Even if you have an awesome job now, your company could get bought out next week, your beloved boss might bolt, or your entire industry could evolve in ways you never anticipated. Get ahead of these situations by devoting one hour per week to bolstering your personal brand. Update your resumé, polish your LinkedIn profile, jot down recent work accomplishments while they’re still fresh in your mind, and build that professional website you’ve been meaning to. Also grab coffee with that guy you met at a cocktail party — you never know which casual acquaintances will become key career assets later.

Take a minute and scroll through your smartphone’s photo library. Does it reflect the good times, great friends, and amazing sights you experienced this past year? Or is it empty or mostly just selfies taken after long, sweaty rides? If you’re not in the habit of snapping photos of family, friends, and awesome events and scenery, start now. You’ll be thankful you captured those memories later. There’s nothing wrong toting along an old-school camera, either. That said, don’t get so snap-happy that you forget to be present. Make sure you actually take in the concert, game, or sunset and don’t become that annoying dude holding his smartphone high above his head the whole time, elbowing out his date and blocking everyone else’s view.

Free Yourself from Work

Back in the day, men clocked out, came home, enjoyed dinner with the family, and forgot about work. Weekends were spent tinkering in the garage and grilling steaks, and vacations were never interrupted by email. We all know that’s no longer the norm. It’s on you to make it stop. Silence your phone during dinner, and power down your laptop after you’ve checked email so that any new incoming messages won’t draw your attention away from family time. Make it clear to your co-workers that any snags that arise while you’re vacationing can wait until you return.

Start Waking Up at the Same Time, Every Day

Yes, even on weekends. A recent study reveals that adults who sleep in just one hour later on Saturdays and Sundays than they do during the week have higher BMIs, worse cholesterol, more insulin resistance, and increased risk of Type 2 diabetes and heart disease. The issue with continually shifting your sleep schedule is it confuses your body’s biological clock, which winds up disrupting metabolism, hormone production, and other important processes. Nobody’s saying you should skip a Friday-night party just so you can get to bed and wake up early. But any time you’re able, stick as close as possible to your weekday routine.

Work in One Long, Slow Cardio Day to Your Fitness Routine

Top running and cycling coaches know that the secret to speeding up is slowing down. You definitely want to go all-out some days — but you’ll boost fitness and performance even more if you incorporate low-intensity cardio into your training. “The benefits of high and low intensity are complementary, so you really need to do both,” says Matt Fitzgerald, author of 80/20 Running. “Low intensity is gentle, so you can do a large amount of it, but it’s also fairly weak, so it takes a lot to yield its maximum benefits. The most effective cardio training program combines a large amount of low intensity and a small amount of high intensity.”

Does your willpower crack the moment you spot a slice of cake or you see that six-pack of Kentucky Breakfast Stout chilling in the fridge? Let yourself have dessert, beer, or booze — but only if you’ve exercised for at least 30 minutes that day. Make it a hard-and-fast rule that unless you’ve burned through a few hundred calories, you’re not allowed to consume a few hundred extra.