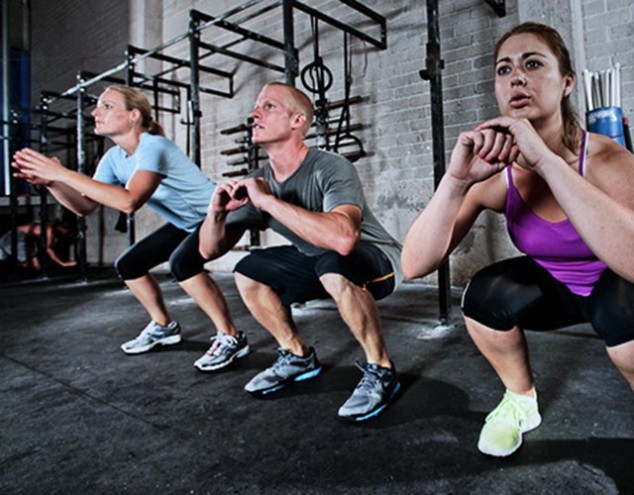 What if you could get all the benefits of a sweaty bike ride and a trip to the weight room in 7 minutes?

There’s an app for that — and it’s the best one we saw this past year.

Anyone can use the app — all it takes is a smartphone, a spare wall, and a chair.

The 7-minute session (which was so successful it inspired the New York Times to release their own version of the app a few months after the original came out) consists of 12 relatively standard exercises like jumping jacks, sit-ups, and push-ups. Ten of them require nothing but your own body (you’ll need a chair that can support your weight for the other two).

Here’s the full set of exercises, which I tried out myself:

Between each exercise, you rest for 10 seconds.

The workout is quick, unpleasant (in the way only a good workout can be), and came with some pretty quick results — I was slightly sore in two areas of my body that my 5-day-a-week yoga regimen hasn’t seemed to have reached. I also noticed a little bit of extra mental clarity and decreased anxiety (which is why I do yoga) immediately after the workout.

Another plus to the 7-minute-regimen: I live in a New York apartment with very little extra space, but I was nevertheless able to do the whole workout in a corner of my living room using just my phone, a yoga mat, and a fold-up chair.

The Times app illustrates how to do a wall sit. Screenshot

As expected, the physical benefits didn’t seem to last quite as long as my 1.5-hour yoga sessions. While my heart raced and my mind cleared for a few minutes immediately after the workout, those side effects wore off within a few hours. I only did it twice, though, so perhaps if I committed to a daily 7-minute workout the benefits would persist.

Also, since this specific workout is so new, there are no long-term studies comparing its results to those of longer cardio and weight-training workouts. In general, though, the evidence researchers do have supports the benefits of high-intensity intervals, both in terms of building muscle mass and improving heart health.

Even for patients with coronary artery disease, short bouts of intense interval training were found to be more beneficial in helping them regain heart function than traditional, continuous workouts — though anyone with a heart condition should consult a doctor before trying a new exercise routine.

The workout is based on the idea of interval training, an exercise style of short, intense periods of exercise broken up by brief periods of rest. Despite being far less time consuming, an interval workout may actually be more beneficial than a comprehensive, hours-long bout of exercise, according to some research done in the past decade.

So instead of a grueling one-hour run followed by weight-lifting, for example, you can do several minutes’ worth of intense push-ups, squats, and jumping jacks for similar results.

That’s pretty significant considering that many of us skip working out because we feel we don’t have enough time, because the weather is bad, or because a gym membership is too expensive.

The Mayo Clinic endorses interval training, as does the American Council on Exercise. A 2012 study comparing two groups of runners — one who trained by doing traditional, continuous runs and another which did interval training — found both groups achieved nearly the same results (the only difference being that the interval trainers had better peak oxygen uptake, an important measure of endurance). And a recent study in the journal Diabetologia found that doing walking interval training — walking briskly for three minutes and resting for three minutes for an hour — helped people with diabetes control their blood sugar levels far better than simply walking at the same pace continuously.

The most important thing when doing interval training is committing as much effort as possible throughout the whole workout, making sure to push yourself. After all, each exercise only lasts 30 seconds.