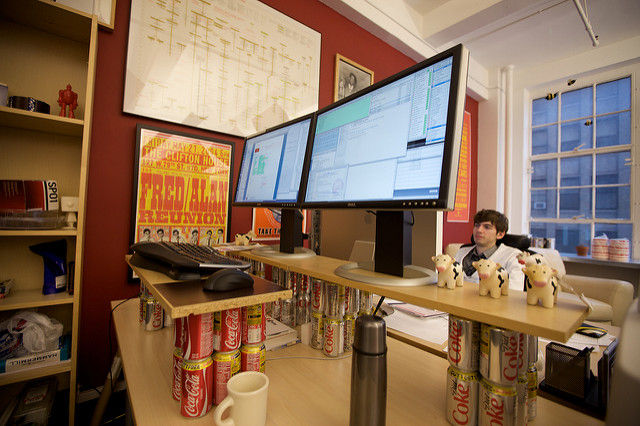 Marco Arment68
With the rise of standing desks, office workers hope to brush off the health risks linked to prolonged sitting, including obesity, cardiovascular disease, diabetes, and early death. But they might do well to walk calories off instead, a new study suggests.

In one of the few studies to carefully count the calories people burn while sitting at a desk, standing, or taking a leisurely stroll, researchers found little difference between being plopped down or upright. Standing for an hour might burn off an extra nine calories or so, about the amount in a single gummy bear. Slow walking, on the other hand, incinerated 2.4 to 2.7-fold more calories than standing or sitting, respectively. If office workers fit in an hour of strolling throughout each day—tallying trips to the bathroom, walks to the printer, or strides on a treadmill desk—they could easily burn through an extra 130 calories. That’s a little more than what previous research suggests could help people keep pounds off, the authors report in the Journal of Physical Activity and Health.

“If you’re looking for weight control or just solely at the energy expenditure, standing isn’t that much more beneficial than sitting,” Seth Creasy, an exercise physiologist at the University of Pittsburgh and lead author of the study, told Ars. Of course, calorie burning isn’t the only reason people might choose a standing desk. Being upright could be beneficial for productivity or posture, Creasy said. However, more research is needed to know if those benefits are real because the studies that have been done so far have come up with mixed or inconclusive results.

For energy use, though, the literature is getting pretty clear. In past studies looking into the differences between standing and sitting, researchers found small changes in calorie burning similar to those Creasy and his colleagues found. With their new study, they tried to nail those calories down for good and look at more than one single activity at a time. No one gets to the office and sits, stands, or walks for eight hours straight, Creasy explained. People switch positions, take breaks, and move around, he said.

To see if there were any effects of those shifts, Creasy and colleagues set up an experiment with activity combinations. With a total of 74 healthy volunteers, the researchers randomly assigned 18 to sit at a desk with a computer for 15 minutes then stand without fidgeting for 15 minutes. Another 18 participants sat and watched television for 15 minutes and then walked. Twenty started with slow walking—at a self-selected speed of around two and half miles per hour—and then sat and watched TV. And the last 18 stood and then sat at a desk with a computer.

During each 30-minute activity combination, the researchers had the participants fitted with face masks, which basically measured their exhaust. This allowed the researchers to precisely calculate how many calories they were burning.

The researchers were curious if the order of activities changed how much energy participants used overall. For instance, perhaps starting with a walk would rev up calorie burning in subsequent sitting. But it turns out the order doesn’t matter. There was a tiny uptick, but nothing statistically or clinically significant, Creasy said. In the other combinations, the order didn’t matter either.

In general, 15 minutes of walking burned an average of 55.9 calories, sitting with a computer burned 19.63 calories, sitting and watching TV burned 18.66 calories, and standing burned 21.92 calories. There was no statistical significance between the sitting activities and standing, the researchers noted. And even if it does result in a few extra calories burned, it’s unclear if that could result in any measurable health benefit.

Like all studies, this one has some limitations. The study participants were healthy and mostly lean, unlike the general population and perhaps the people most interested in using a standing desk to help lose weight. But Creasy said he expects the general findings to hold up in people who are obese. The study also had people stand or sit as still as they could, so it might not capture any significant variations resulting from fidgeting or shifting around in either scenario.

The study also doesn’t address a fundamental question in the sit vs. stand debate: are the negative health effects linked to prolonged sitting caused by the sitting itself or a lack of activity? Like prolonged sitting, a lack of exercise is also linked to obesity, cardiovascular disease, and diabetes. And earlier research has found that those who do sit for long periods but are also activedon’t face the same health risks. But other research has suggested that sitting alone can be bad, causing discomfort and poor circulation. Still, standing for long periods of time may also cause problems such as enlarged veins.

On this bigger question, “the jury is still out,” Creasy said. Researchers are looking into whether exercise can override our sedentary lifestyles, plus whether standing desks benefit productivity, comfort, and other health issues.

A few small studies have come out showing that standing desks can boost productivity, but a few others have shown that they don’t. Others are inconclusive. For instance, in a recent study on the productivity of call center workers who were assigned either standing or sitting desks, researchers found that the standers were as much as 53 percent more productive than sitters. But the study lacked baseline data of how productive each group was to start with, so the results are not conclusive. An interesting find, however, was that in surveys, the standing workers did report less back pain and discomfort than their seated counterparts.

As researchers work out which desk setup might be best, Creasy points out that moving is always a good idea. He suggests getting creative with figuring out ways to add intermittent bouts of walking into your daily routine, such as moving the printer farther down the hall or having walking meetings. He points out that benefits can be seen with just casual, slow walking. This isn’t exercise, he emphasizes.

One thought on “Healthy Byte: Stand vs Sitting @Work”